Skip to content Skip to left sidebar Skip to footer 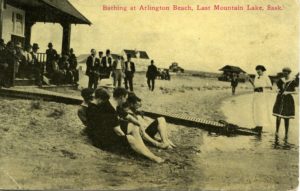 A hotel was built at Arlington Beach in 1910 where it was the center of activity for the William Pearson Land Company. Customers were brought from all over Last Mountain Lake by early steam ships that steamed up and down the lake before the railroad came to the region in the early part of the 20th century.

Business was boosted by the early steam ship, the Welcome which started business on Last Mountain Lake in 1905. In 1907 the Qu’Appelle, an eight crew steamer that could accommodate 200 people started making the run up and down the lake until 1913.

Arlington Beach House was very popular and was declared by visitors to be one of the coziest resort hotels in Saskatchewan. Visitors from down east compared it favorably to their favorite watering holes and Arlington Beach became known as a great place to swim, fish and boat.

As the area matured and become more populated during the twenties and thirties, it became a favorite spot for community picnics and activities.

In 1942, Arlington Beach was bought by the Canadian Sunday School Mission. At this time there was a few public buildings. One building was a dressing room for swimmers while another was a boat house. There was also a band shell and a small round building that was used for ticket sales to local sporting events.

After Arlington Beach was sold to the Canadian Sunday School Mission, buildings were moved and converted into dorms, and a large tabernacle was built for 300 people. The hotel had started to fall into disrepair and as an interim step, the fireplace was removed from the Arlington Beach House.

After two years of renting the camp, in 1960, the Free Methodist Church in Canada bought Arlington Beach from the Canadian Sunday School Mission for $14,000.00.

The highlights of the location were.

In 1965 and 1966, the tabernacle from Moose Jaw Camp Grounds is dismantled, moved, and reassembled to serve as the largest meeting place at Arlington Beach. In 1968, Cymric United Church is purchased for $100.00 and moved to Arlington Beach and kept as a church. In 1975 and 1976, the Kinney Memorial Lodge opened. It has a 300-seat dining room, rooms for 84 people, two lounges and an apartment for staff. In 1980, major renovation work is done to Arlington Beach House. Rewiring, insulation, and drywall are all redone. Restoration requires considerable stabilizing of the structure and removing many tons of lath and plaster. The summer dining room attached to the hotel is moved and converted to storage and classrooms. In 1983, a marina is built to provide a calm place to launch boats when Last Mountain Lake is too rough to negotiate safely.

There are no events

There are no notices